I’m a pretty cool dude, if I do say so myself, not normally ruffled by much. There’s a high, shrill beep the tire pressure monitor for the trailers makes that’s kinda freaky, I’m not a fan of big claps of thunder, but, other than that, I’m not easily fussed.

However, keeping my cool in the temperature sense has become more of an issue. I’ve always loved a dip in cool water on a hot day, but it used to be more of a perk than a necessity.

At 11 ½, I just don’t seem to have the same tolerance for heat that I once did. On a cool, cloudy day I can walk as far as dogs half my age. On a hot day, I fade quickly, and wish for that wagon T promises to get for my old age.

We’ve been having a heatwave here in Alberta for a couple of weeks now and, although my peeps are pretty good about taking me out early in the day before it heats up, things just don’t always work out that way. Whether early or not so early, I am so grateful to walk alongside the water that runs through our country neighbourhood, the irrigation canal. I used to be a one- or two-swim walker, but lately, I’m in the water half a dozen times or more.

During the growing season, when the farmers to the east need plenty of water for their crops, the canal is running high and clean. Or it seems pretty clean to me with its blue-green colour the same as the river it originates from. Which doesn’t explain why my peeps think I need a bath before going on a trailer trip, but, anyway…

I always assumed Logan got overheated easily because of his black coat. Turns out that was only part of the problem. Age. Damn. And I thought I’d always be invincible.

Our heatwave has taken a hiatus for at least today, with rain and clouds arriving overnight. Fine by me. It was cool in the house this morning and I hear we’re off to Strathmore for some dog park time. I like to get in a little socializing with other four-leggeds, but, truth be told, the best part of the dog park outing is the stop at Tim Hortons on the way there. Timbit here I come!

Stay cool out there,
Chico

I realize the expression is that the world is my oyster, and I actually like oysters, the smoked ones from the can, but my world is about so much more than oysters. There is food to be found everywhere if you use your nose and you’re not too fussy. That’s me … great nose and not at all fussy. So, at this time of worrisome news and fears over there not being enough for everyone (although I’m quite sure there will be) I thought I’d share a few of my methods.

T and Nollind often laugh, or freak out, when we’re out walking because I find snacks everywhere. The freaking out happens when my findings are chicken bones or other items potentially hazardous to my well being. They say I’d make a good stray because I’d never starve. Well, no harm in being prepared. I was abandoned when I was two, it could happen again. But that’s unlikely.

One of my favourite things to find in the fields around home are mushrooms, especially at this time of year when they’ve been freeze-dried. T was pretty concerned at first, always pulling me away from them, but after a few times she wasn’t close enough to stop me and I managed to down a few without dying, she decided to trust my instincts.. There’s only one type that I like and so far I haven’t had so much as a stomach ache. In fact, I learned that some mushrooms are very healthy for dogs, even preventing cancer. I’d like to think mine are on this list, although I’m no expert in mycology.

I won’t go into a detailed list of things I find while out walking in the fields or along the canal because you probably wouldn’t find them very appetizing. My understanding is that humans generally don’t like eating the droppings of other animals (you’d be amazed at how tasty rabbit droppings are to name just one, not to mention high in digestive enzymes and B vitamins).

So what else do I find to eat out there in the world? Well, for starters, grass is pretty tasty, good for digestion, and loaded with healthy chlorophyll. I sure miss it in the winter time and am looking forward to when the green snacks start sprouting from the ground. Some think that a dog has worms if he starts eating grass, or there’s something missing in his diet, or is trying to throw up, but in most cases it’s just because we like it. Now if your dog starts gulping grass like he’s starving, there’s probably an upset stomach involved, but even that might just be indigestion, nothing to panic over unless the behaviour continues. Then it’s probably time for a trip to the V-E-T. (I can also spell W-A-L-K.)

Another great place to seek out snacks is underneath picnic tables. I could make an entire meal out of what humans leave behind. The best tables are the ones where kids were eating. It is my favourite thing about small people, their tendency to drop food. So, a big thanks to all you parents out there who like taking your children on picnics or camping trips. Pieces of sandwiches, cookies, hot dogs, and all sorts of other things can be found underneath one of these magical structures during the outdoor dining season.

My general advice is, don’t be too fussy. If you can’t go to your favourite restaurant because they’ve closed their doors during the pandemic, try making the dishes at home. Nollind made a delicious satay soup last week. If something you normally buy is missing from the grocery store shelves, try eating outside your normal shopping list. It probably won’t be field mushrooms or rabbit droppings, but use your imagination. If you don’t like it, you can always feed it to the dog! You’re welcome, dogs of the world.

As I mentioned last Fur-iday, T’s away visiting family. She’s been gone for a week and, despite my concerns, it’s been pretty awesome. Nollind has taken on his animal care duties very seriously and, after only one day of needing to remind him to feed me, he latched onto his new responsibilities with gusto.

Some of the highlights of the week include:

Moving my favourite bed in beside his favourite bass guitar which made me feel pretty important. 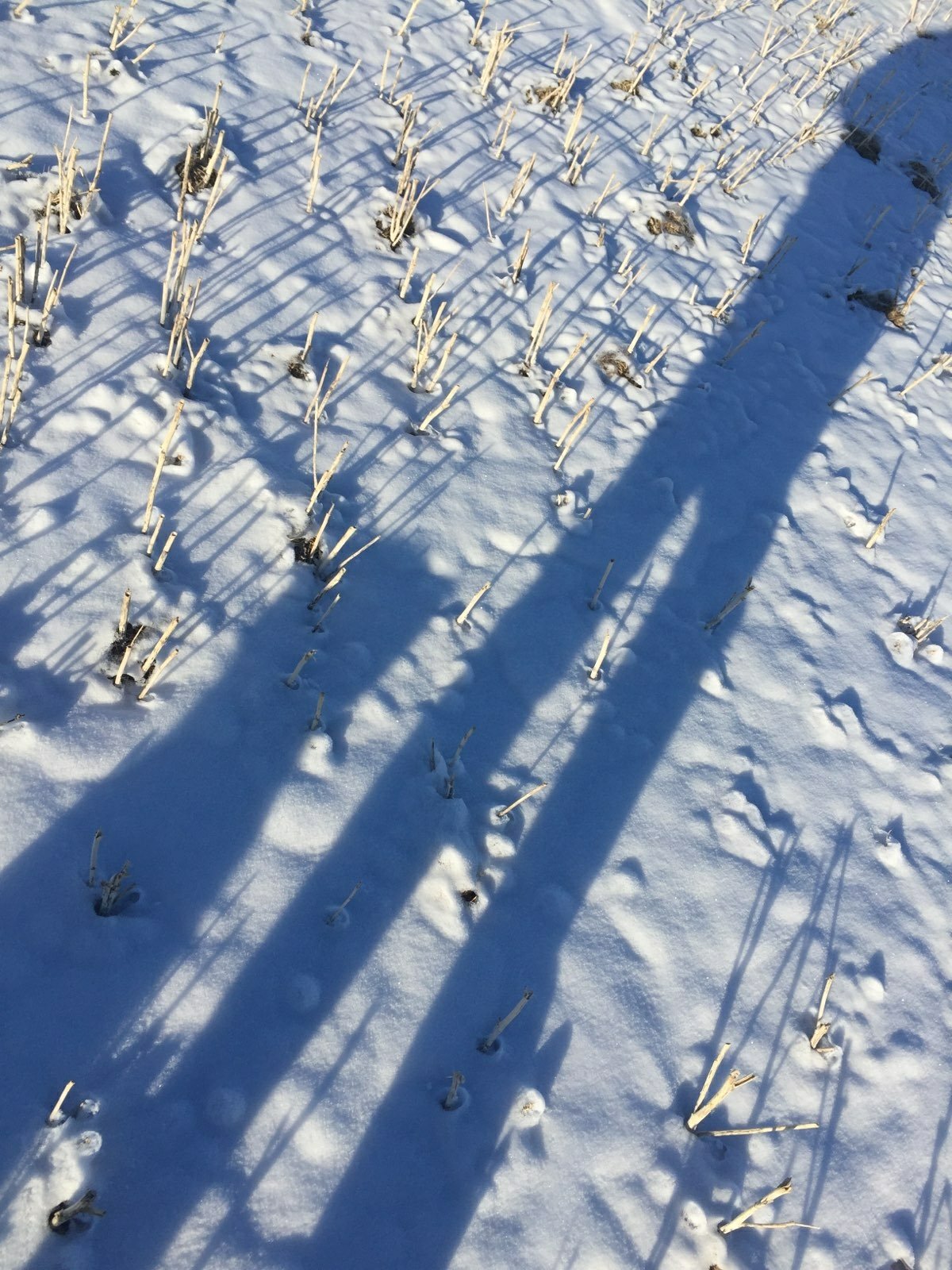 … with plenty of treats. 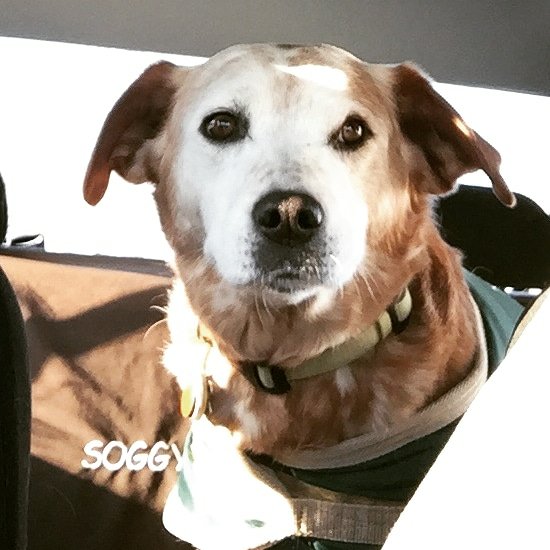 … where I got to ride shotgun … 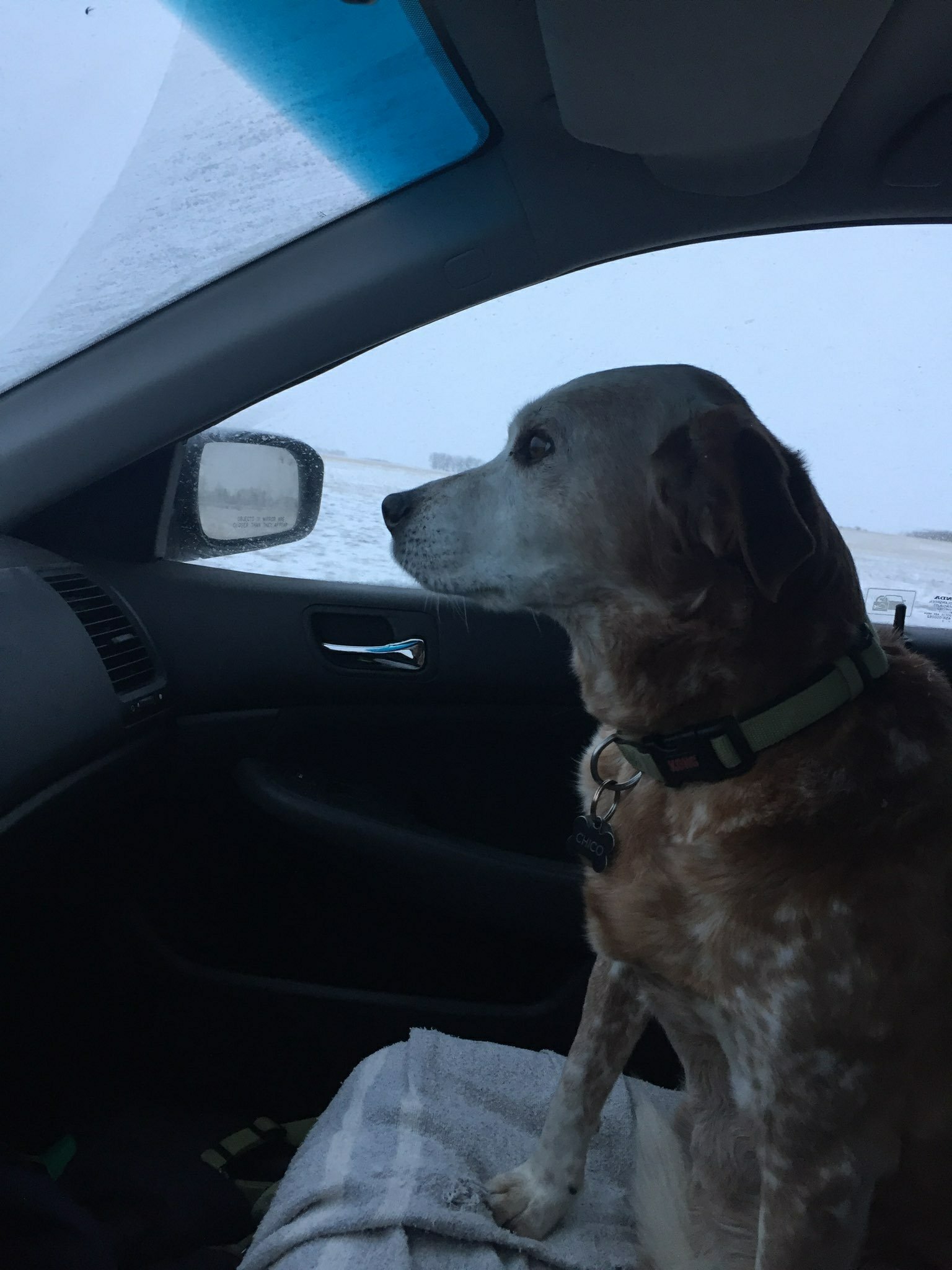 … and go to Tim Hortons.

There were matinee movies with popcorn … 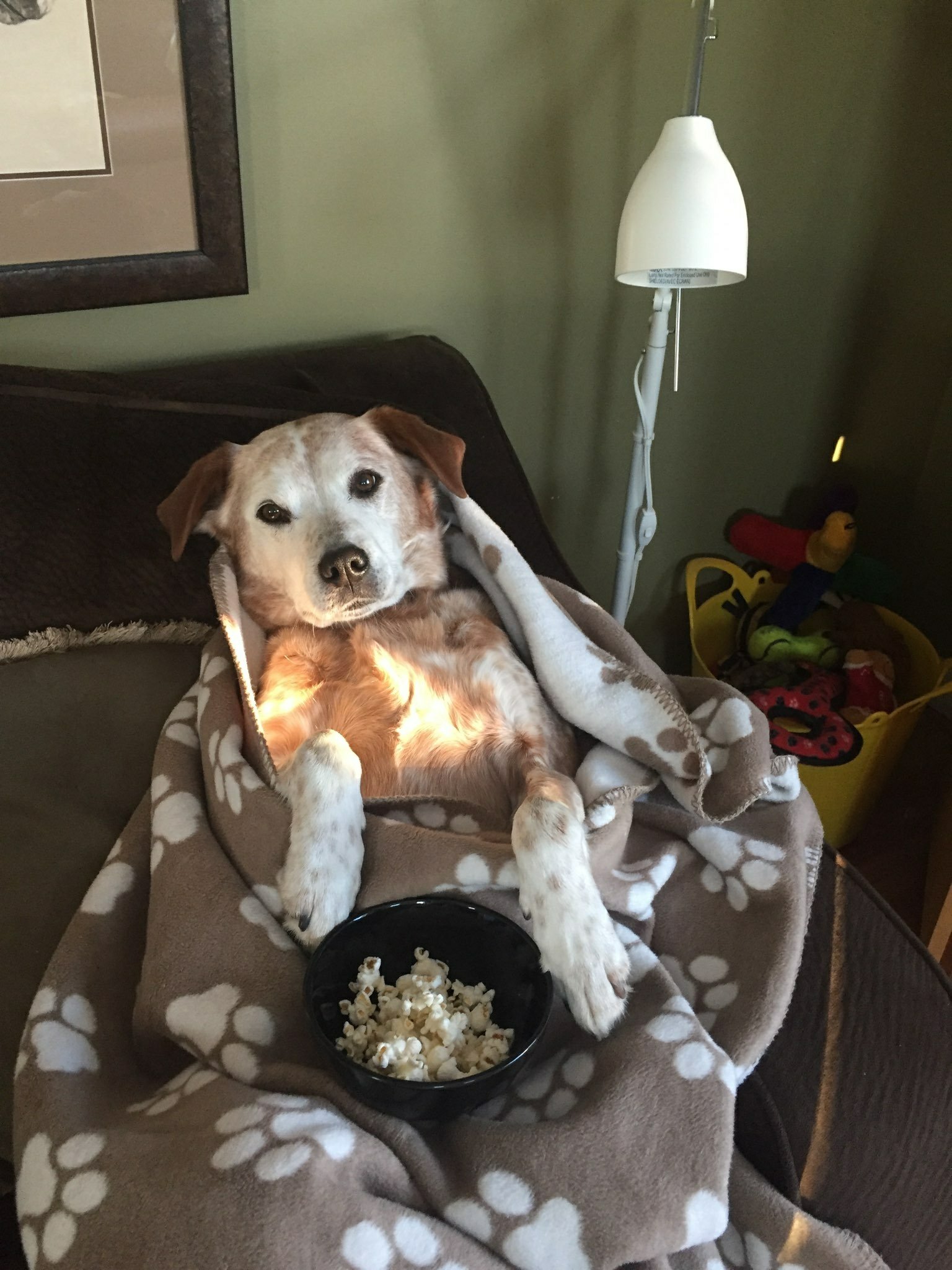 … and plenty of great naps.

So, as you can see, I haven’t suffered during T’s absence. We guys had a good old time. 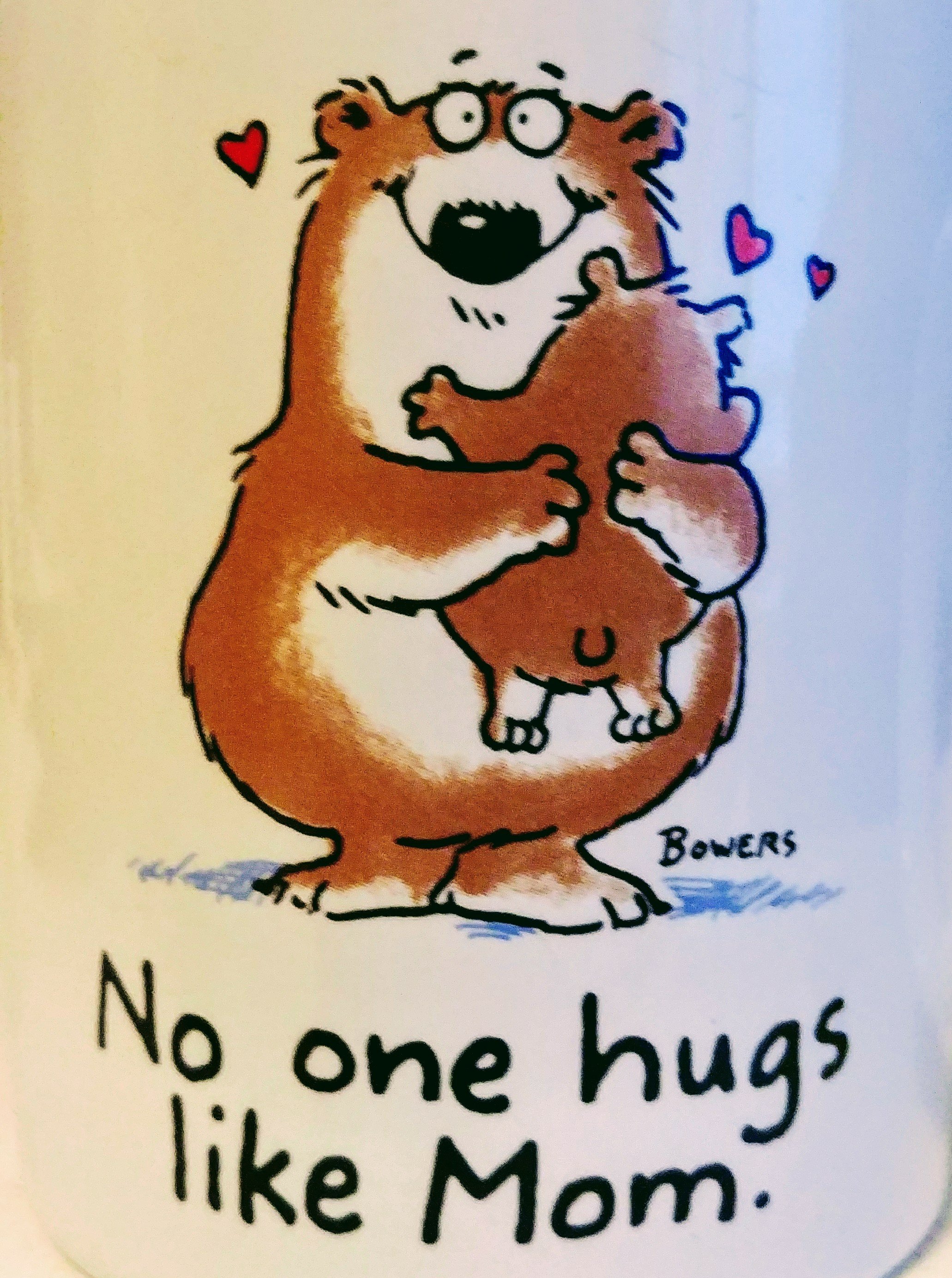