It’s been a year since I first visited Barrett Veterinary and started on my ten steps to healing. Considering my multiple health issues, my age, and that one year is like seven for a dog, I’d say I’ve done pretty well. And by pretty well I mean still on the top side of the grass.

The problem is that the same 10-step program that, a year ago, got me out in the field doing 1-hour walks, now just gets me to the barn and back, and our barn isn’t far from the house. It didn’t happen all at once, of course, it’s been gradual. My 1-hour walks became 45 minutes, then 40, then 30, then 20, and so on. It’s hard to believe I was still walking a mile every morning when we first came home from Arizona in March. When I look south to the neighbours’ place now, a half a mile away, it seems a formidable journey.

These days I go out to the barn to help with chores once or twice a day and make the trek to the end of the driveway with Nollind to close the gate at night, even if the gate is already closed. I like the routine, and I like to feel included in the happenings of the farm, like I still have a job.

Helping with the herd used to be my thing. I’d rush right in to assist when Teresa was moving horses around. These days I hang back, far back. My Border Collie herding instinct still says, “Get in there,” but my survival instinct says “Are you nuts?” I swear those horses are a lot bigger than they used to be, or maybe I’m smaller.

My life is definitely a lot different than it was a few years ago, even a year ago, but it’s still life, and it’s still good most days. I enjoy different things at a different pace. I always did like lying on the deck or in the yard watching the world go by, so that hasn’t changed. What has changed is that I just let it go by, the world, rather than chasing after it. 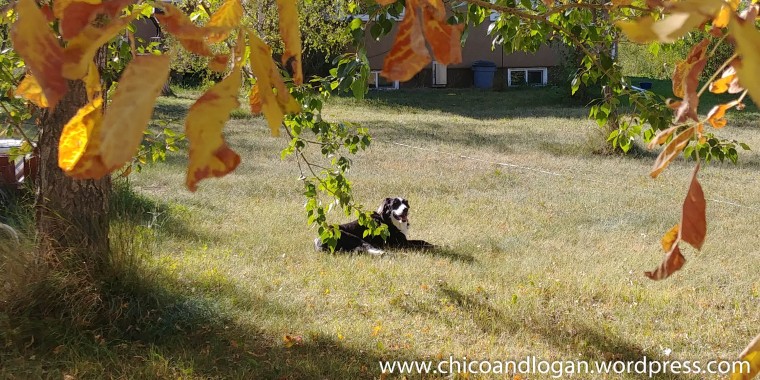 I don’t know how much longer I’m going to be here. Walking is getting tougher, the Legend isn’t helping much anymore, and some days it’s a challenge just to get up off my bed. Teresa got me some supplements that help settle my nighttime restlessness and my medications have been adjusted to levels that seem to keep me going as best they can but, when I look at my condition compared to a year ago, I know I don’t have another one in me. There’s only so much sliding downhill that can happen before the toboggan reaches the bottom and stops moving.

But, until then, I’ll be here, keeping the troops entertained. I figure as long as I have a skip in my step (in addition to a limp) and a light in my eye, I’ll be bargaining for a few more days. 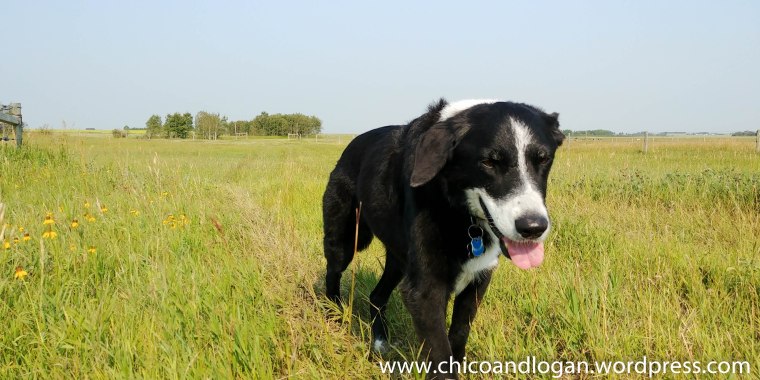 Dog sitters are kind of like substitute teachers. You know how even the good kids might push on a substitute like they never would their regular teacher? Well, that’s what it’s like with a dog sitter. A guy can get away with just a little more.

In my case, I’m already pretty good at working my full-time people and they’re kind of easy but, bring on new recruits and I hit all-time highs. Take my pills, for instance. I know what’s “hiding” in those tasty treats they offer me three times a day. It’s cute how they think they’re being sneaky. But here’s the reality, I know the pills make me feel better but, if I make a fuss, I get better wrappers.

It started with Greenies Pill Pockets, which are pretty tasty, and it took me a while to realize that I could up my game, get something better. All I had to do was stop eating Pill Pockets. It wasn’t easy, especially out walking. Teresa would pull a morsel out of the little treat bag that clips to her belt and, in my enthusiasm, I’d swallow it down before I realized it was Pill Pocket and not some other tasty tidbit.

Once I stopped eating the Pill Pocket altogether, they moved on to liverwurst. Yum. That stuff was so good, particularly the brand they found down in Arizona. I thought I’d reached the ultimate in pill coatings. But, after a few months I began to wonder, if I don’t eat the liverwurst, what else might they give me? I love chicken, but it’s hard to wrap a pill with a piece of chicken, same goes for steak, so I knew those were off the table. What the heck, I decided to gamble. I refused the liverwurst.

Again I thought I’d surely reached the pinnacle of pill dressings. But, then again, maybe not. What if I was missing out on something better? It was tough, but I refused the liverwurst with bacon bits and grease. I couldn’t wait to see what they’d bring home from the store next trip into town. Any guesses? Have you ever tasted canned corned beef? Oh my. So delicious.

I was content to stay with the corned beef for a bit, ride the wave so to speak, but then, bwa ha ha, the dog sitters came to stay. It was just too good an opportunity to pass up. After all, they weren’t going to be around long and might have new and better ideas about how to give pills to an old dog. They’d had one for a long while. Any of you remember Dame Dixie?

First day out I turned down the corned beef and I was prepared to refuse any attempts to dress it up with bacon bits. I was holding out for something new. It took a couple of days of trying different things, things I’d refused before, but then G and S pulled out all the stops, offering up steak tartare (sans capers) topped with crumbled chicken breast au jus. My mouth waters just thinking about it.

I’ve had to back things up a bit now that Teresa and Nollind are home and I’m settling for raw ground beef as a wrapper, no chicken crumbles au jus. But, it’s been ten days, probably about time for an upgrade. Don’t you think?

Lazy. Hazy. Crazy. That about sums it up.

I’ve always liked a good nap, especially on a warm day, but this summer, my fifteenth, I am borderline lazy.  I have found more places to sleep in Logieland (isn’t that a great name?) than Nevada has spots. Just when I think I’ve got enough nap locations, I discover yet another shaded, grassy, idyllic piece of paradise.

The hazy I speak of is due to the forest fires in our neighbouring province, British Columbia. It isn’t a big deal but it has caused my eyes to burn a little and my throat feels a bit raw. It would probably be a lot worse if I was actually doing anything other than sleeping most of the time. I guess being an old dog with arthritis and a heart condition has an upside!

Which brings me to crazy. The crazy has nothing to do with a hectic pace, lots of outings, or full days. I wish. The crazy has been in my head. But, before you worry, it’s getting much better. The old brain has not given it up to dementia just yet.

It started at the end of our camping trip last month. Not only were my guts in turmoil but so was my brain. A call to the vet resulted in a round of antibiotics and other stomach settling meds that got the GI problems under control, but the crazies continued. Teresa was worried I’d slipped a cog and wasn’t coming back. So was I quite frankly.

But then, in true amateur vet/sleuth fashion, Teresa set about researching my conditions, my symptoms, my medications. My greatest advocate came to my rescue again. What she found was that two of the pills I’d been getting for quite some time don’t play well together. In fact, the combination of them can cause diarrhea, restlessness, and anxiety, all the things I’d been experiencing. She almost threw out all of my meds right then and there. Enough!

But, instead, we embarked on a path of medication reduction. One med of the pair that doesn’t play nicely was removed altogether and two others were reduced.  Can you say “withdrawal symptoms?” Holy DTs! I was a mess for the first week, even though the drugs were being tapered off slowly. I paced. I panted. I hardly slept. I was a wreck. Who knew Gabapentin was such an addictive beast?

But, she got me through it. The crazies were worst in the evening and she sat with me every night. She’d watch TV while I lay at her feet on my favourite blanket. There was something about the ritual that was soothing. I’d start to feel anxious and she’d put the blanket on the floor, I’d lie down, she’d climb into the big chair, and we’d spend the next few hours that way. If I started to feel unsettled again, she’d give me a rub and I’d go back to sleep.

It’s been almost a week since our last TV/blanket night. I’ve been feeling much better since then. I guess I’ve kicked it, or at least part of it. I’m still getting some of the medication but less than half of what I was. Admittedly, my stupid arthritic elbow is more painful than it was, but I’m not as wobbly and my mind is clearer and calmer. A fair trade I’d say. I even slept through the night the past few, which I know makes my light-sleeping dog-mom very happy.

Despite the increased elbow discomfort, I’m getting around okay. I still help out at the barn every day, patrol Logieland regularly, and get out for short walks. And, if I walk too far and don’t think I can make it back, I just call a taxi.

Dancing with my girl. Her name is Posh and we met on a hike yesterday. So pretty, and she smelled like...rainbows. 😍